My “Made in China” Teapot Story

I’ve been working professionally with clay in Holland for nearly 30 years. For the last 6 years I’ve been exhibiting my teapots in a top seafood restaurant in Shanghai in China. Because this year was the last year for the exhibition I was invited to the opening. I’ve always wanted to go to Jingdezhen (the porcelain capital city of China) as well so I decided that this was a good opportunity to do that.

I flew to Shanghai with a suitcase full of my “dog” teapots for this year’s exhibition and picked up the money for the sold “chicken” teapots from last year’s exhibition. That money bought me three weeks accommodation, work place and food in Jingdezhen.

Arriving in Jingdezhen I felt a bit overwhelmed. My goal was to not do anything that I would normally do at home and hopefully to learn new things. But there was so much to see there and a seemingly never ending amount of possibilities. I just didn’t know where to start! At home I make sculptural work out of thrown pieces so my initial intention was not to throw, but having said that I found the super white porcelain there so amazing, even probably the best porcelain I have ever used, that I just couldn’t resist!

I have always wanted to learn some Chinees porcelain techniques. In the first week, I started by learning some new carving techniques. Afterwards, I tried to do the rice bowl technique with the glazed over rice holes, which turned out to be a lot more difficult than I thought. I also started using celadon glazes, which, having only an electic kiln at home, is something that was otherwise beyond reach.

Sharing the workshop with me at the same time was a group of Swedish potters, some students from the Leksand school with 4 older people of my age. They were all lovely, friendly people and extremely productive which turned out to be quite infectious!

Nearing the end of my first week I woke up in the middle of the night thinking how much I’d really like to make a series of teapots, not thrown as I usually work, but slip casted. It would be a challenge as at home i don’t think that would be possible in just two weeks, but then this was China! I got straight to work designing and making an accurate sketch for the model maker. I had to make the measurements 25% bigger than I wanted as that was approximately how much the porcelain shrunk after fireing.

My design wasn’t the easiest as it took the model maker 3 days to complete. I then passed it on to the mold maker. After another 2 days of work for the mold maker I then had to get the mold dry so that it could be slip casted, luckily the public kilns work wonders for that and at the end of the second week I had my first teapot parts ready to assemble.

I decided on making a limited edition of just 10 teapots with each one being uniquely decorated. The design was inspired by the Chinese ceramics that I saw in Jingdezhen and in particular their use of gold. I wanted them to have royal feel and be fun to use. I made an oval design thinking that 10 would easily fit in my suitcase to take home but after getting a packing box made, which is just about obligatory in China, I could only get 2 in my case and had to post the other 8 home! I just managed to get them all ready in time before I had to leave.

The beautiful weather helped with the timing for drying the clay and the fact that in Jingdezhen they usually only fire everything once so that saved me a couple of days too. I’m now hoping to find 10 teapot lovers around the world who would like to own one and then maybe I can return to China with a new project! 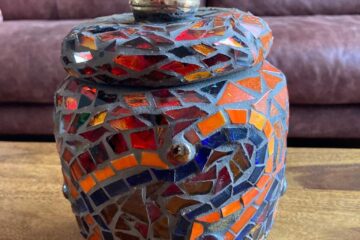 I’ve recently started working together with the mosaic artist Mariel Klein to create unique urns and memorials. I start by making the urn on the potters wheel and when it’s been fired 3 times to Read more…